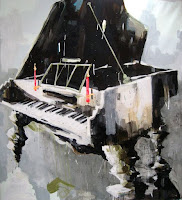 Kjærgaard’s reclaimed timber plank construction leads mutely into the gallery. Elegant yet nebulous, the wooden alleyway describes an opening and a long deep recess rather than a pathway. Lodged in the back of the recess is the disproportionately large lift, still occasionally in use, utilised by Kjærgaard to house the small projection of her recent film work, Into The Pyramid (2008). Beyond the lift is a further construction out of the same timber planks, similarly horizontally slatted and screwed together with small black screws. Although neat and well made the whole structure is haphazard and precarious, threatening to fall and engulf you at any moment. At the back of the gallery the wooden slats give way to an amorphous tangle of material, rope, wooden fruit boxes, the legs of a strange figure, a badly made kite or small hang-glider model all sat atop a rusty bike. This element of Kjærgaard’s installation is in collaboration with the other artist in the show, Mary Mattingly, and engages in a very different register than her previous installations. Although seemingly chaotic and ad hoc, on closer inspection, Kjærgaard’s structures belie her architectural training. Carefully poised on the edge of collapse they suggest a hasty addition, the provisional and anxious constructions of humans on the brink of extinction, of fleeing tribes or dilettante tree house builders. However, despite not being fixed into the floor or ceiling at any point, these planks have been sawn specifically for this space and as such are wedged firmly and screwed securely to each other, producing a surprising rigidity. Accompanying the installation are four large scale paintings depicting further imagined wooden structures, a grand piano, a typewriter and one of her ongoing obsessions, a boat. 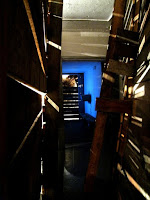 Arguably, the key to Kjærgaard’s practice lies in a conjunction between the sea and the land, the paintings of boats depict them left perched on high ground at low tide, and her wooden platforms and houses are shown balanced on precarious stilts or in the crooks of branches high in the canopy. In fact, one could go so far as to suggest that the sea and land in her work are conjoined also in their absences. Boats without water and houses without foundations suggest a fiercely fluctuating tide, the occupants of both caught short or wise enough to build high above land. But there is another element at play. Kjærgaard parasitically intervenes to create sculptural structures, employing short term and cheap constructions that go up and come down fast, resting in the space between architecture and object. Like a Scandinavian take on the favelas they are human in their materials yet aspire to gestalt greatness. Forever falling in on themselves yet simultaneously holding off the moment of final ruination, these architectural interventions develop temporally sensitive apocalyptic fantasies. Oscillating between utopian dreams and end of the world nightmares, the structure threatens to both thrust upwards of its own accord and collapse without warning. 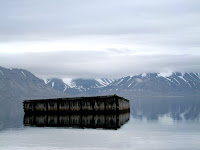 The three minute long film, Into the Pyramid, is an edited series of still images of the abandoned Russian city on the edge of the arctic circle, Pyramiden. Becoming much more than a research trip, Kjærgaard’s exploration of this desolate ex-mining town on the Svalbard archipelago in Norway is a dispassionate yet engaged retrieval of visual language that feeds into her continued project. Boasting the most northerly bust of Lenin, Pyramiden was evacuated in 1998 by its Russian owners Arctikugol Trust because it was too expensive to maintain. Despite Pyramiden’s sad history, the film engages less in nostalgia than an aesthetic endeavour. Indeed one of Kjærgaard’s self-imposed rules is ‘no people’, suggesting an abandoned mining facility as the ideal location for the film. In fact, ruin as by product of lack of human involvement doesn’t seem to be Kjærgaard’s project at all, instead, she re-imagines the ruin as a productive or creative act. There is a play here between her intervention into ruin and her intervention as ruin. Take the title of the exhibition, Ruins of the Future. Ostensibly this suggests dismay at the failed utopian modernist dream. However, I would argue that this title names two distinct possibilities. Both the possibility of the ruination of existing buildings in future time and the ruins of the idea of the future. Or, the ruining of the future. But, to be clear, this work isn’t the representation of ruin as such, but what we could call adapted-ruin. Figured as personal dwellings amassing like favelas at the edges of state control, the structures are both utopian and at the same time antagonistic, a constant reminder of human endeavour in the face of government abandonment. Could one then read Kjærgaard’s work critically? As a strongly democratic or anarchist critique of statist visions of utopia? One could situate this work within the structure of an anti-regeneration argument. The adapted-ruin as an individually productive site of egalitarian resistance to dominant forces. Yet I am uneasy doing this. The strength of Kjærgaard’s work is that it rests only lightly and temporarily, constantly moving on, being constructed and destroyed at regular intervals, to be reduced again to its constituent parts. This throws the work into sharp focus. As architecture it is only temporary, and not nearly large enough or sturdy enough to house a family, yet as object it is too imposing and active in a way. It rests, then, between the two, like the conjunction of sea and land, Kjærgaard’s work acts doubly, at the edge of abandoned civilisation and at the height of utopian dreams.