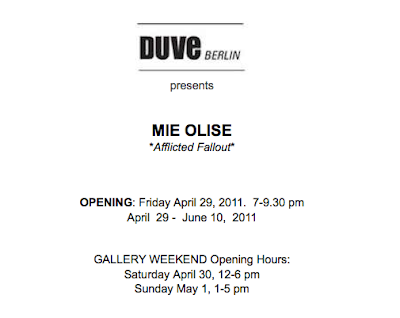 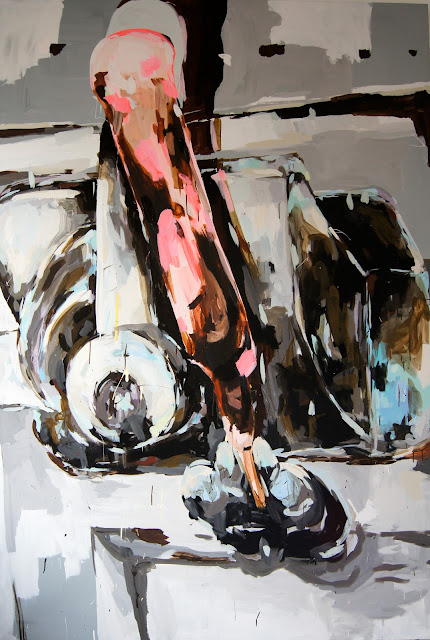 DUVE Berlin proudly presents the second solo exhibition by Danish artist, MIE OLISE. The exhibition titled *Afflicted Fallout* presents new works of painting, drawing and sculpture that investigate, reflect and interpret one of the most controversial moments in the history of science and the development of the atomic bomb.
*Afflicted Fallout* revisits a meeting that occurred in 1941 between two physicist,  in Copenhagen at The Niels Bohr institute, within Niels Bohrs private office and in Auditorium A.  Olise’s artwork invites the viewer inside this location, providing a seemingly haunting insight into the space once occupied with scientific minds, research and now political and social controversy.

The meeting of 1941, historically remains of scientific importance as it signified a turning point of moral, political and scientific concern during the quest for nuclear power on the brink of World War 2. This meeting between the two great minds has later been referred to as “The Copenhagen Fall Out”.


Bohr and Heisenberg worked together since 1924 and had an intense professional relationship, they mentored and collaborated with many of the top physicists of the century and both won the Nobel Prize. Later they were separated by war, Heisenberg in Berlin and Bohr in Copenhagen. In 1941, Heisenberg came to Bohr with the question concerning the possibility of creating the nuclear bomb. “Could one do that in the name of science regardless of politics?” Bohr refused to talk to Heisenberg and never wanted to discuss the topic again. After the war Heisenberg never got Bohr to solve the differences they had that day in 1941.

Heisenberg went back to Germany, and never made the atomic bomb. Bohr, now believing that Heisenberg was making the atomic bomb, made contact with the British Intelligence who assisted his immigration to the UK and America whereby Bohrs assisted the allied forces to build the first atomic bomb, that bomb was later dropped over Hiroshima on August 6, 1945.

Bohrs and Heisenberg aimed at creating a better world through science. However their relationship and the ‘The fall out’ has so many layers. Bohr was Jewish and politically active during World War 2. Heisenberg was working for the Nazis without agreeing with them but wanting to be inside rather than outside in order to make a difference. Both had the intellect and knowledge to develop the bomb, but were politically and morally torn apart. They didn’t meet each other in agreement, and the disagreement is a very sad one, they never saw the other’s positive intentions. Not until many years after both men died, the last part of the argument is revealed in Bohrs books, drafts of unsent letters were found, written by Bohr intended for Heisenberg but were never sent.

Mie Olise went to investigate the two specific meeting-points at The Niels Bohrs Institute for the Bohr and Heisenberg’s 1941 meeting. *Afflicted Fallout* presents 11 paintings, which are interpretations of details of the two specific architectural spaces. The artist has also planted seeds at the addresses in Berlin, where Werner Heisenberg worked during the war, 8 plants for each country confirmed to have atomic nuclear weapons, and 8 unsent letters from Bohr to Heisenberg. In the gallery space visitors will also find a tiny silver sculpture, a map of where to find the plants. Inside the sculpture/structure is a microfilm, coding the structure, so you can find your way from the gallery to the sites of the plants.

Mie Olise was born in 1974 in Denmark, she currently lives and works in Brooklyn, New York where she is undertaking the ISCP – International Studio and Curatorial Program. Mie obtained her Masters of Fine Arts at St Martin’s School of Art in London and a Masters of architecture at the Aarhus School of Architecture. Mie has upcoming solo-exhibitions at the Kunsthalle Nikolaj, Copenhagen Contemporary Art Centre and at Honor Fraser gallery in Los Angeles. She has previously had solo exhibitions at Ny Kunst Museum (SNYK), New Museum of Contemporary Art in Denmark and at Barbara Davis gallery, Houston and had group exhibitions at Ystad Museum of Art, Sweden, the Ovengaden Institute for contemporary Art in Copenhagen and participated at the Istanbul Biennial in 2007, the Liverpool Biennial in 2008 and the Whistable Biennale in 2010.
CategoriesUncategorized